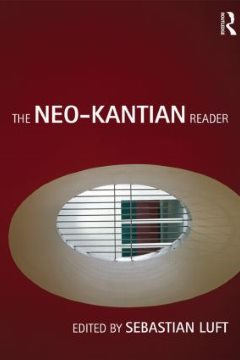 The latter half of the nineteenth and the early part of the twentieth century witnessed a remarkable resurgence of interest in Kant’s philosophy in Continental Europe, the effects of which are still being felt today. The Neo-Kantian Reader is the first anthology to collect the most important primary sources in Neo-Kantian philosophy, with many being published here in English for the first time. It includes extracts on a rich and diverse number of subjects, including logic, epistemology, metaphysics, philosophy of science, and transcendental idealism. Sebastian Luft, together with other scholars, provides clear introductions to each of the following sections (to the authors as well as to each text), placing them in historical and philosophical context: the beginnings of Neo-Kantianism: including the work of Hermann von Helmholtz, Otto Liebman, Friedrich Lange, and Hermann Lotze the Marburg School: including Hermann Cohen, Paul Natorp, and Ernst Cassirer the Southwest School: including Wilhelm Windelband, Heinrich Rickert, Emil Lask, and Hans Vaihinger responses and critiques: including Moritz Schlick, Edmund Husserl; Rudolf Carnap, and the 'Davos dispute' between Martin Heidegger and Ernst Cassirer. The Neo-Kantian Reader is essential reading for all students of Kant, nineteenth and twentieth century philosophy, history and philosophy of science, and phenomenology, as well as to those studying important philosophical movements such as logical positivism and analytic philosophy and its history.