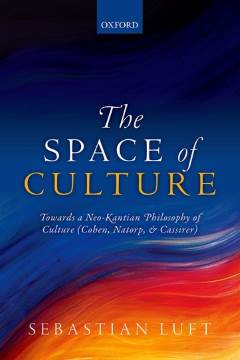 The space of culture

towards a neo-kantian philosophy of culture (Cohen, Natorp, and Cassirer)

Sebastian Luft presents and defends the philosophy of culture championed by the Marburg School of Neo-Kantianism. Following a historical trajectory from Hermann Cohen to Paul Natorp and through to Ernst Cassirer, this book makes a systematic case for the viability and attractiveness of a philosophical culture in a transcendental vein, in the manner in which the Marburgers intended to broaden Kant's approach. In providing a philosophical study of culture, Luft adheres to important Kantian tenets while addressing empirical studies of culture. The Space of Culture culminates in an exploration of Cassirer's Philosophy of Symbolic Forms, and argues for the extent to which Cassirer's thought was firmly rooted in the Marburg School, despite his originality. At the same time, it shows how Cassirer opened up the philosophical study of culture to new horizons, making it attractive for contemporary philosophy.

Luft Sebastian (2015) The space of culture: towards a neo-kantian philosophy of culture (Cohen, Natorp, and Cassirer). Oxford, Oxford University Press.