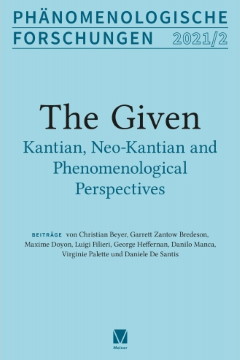 Thought, Being, and the given in Hans Vaihinger's "Die Philosophie des Als Ob"

The goal of the present paper is to assess Hans Vaihinger’s understanding of the notion of the given in Die Philosophie des Als Ob. The claim will be advanced that the overall framework of Vaihinger’s theory of knowledge and, more specifically, his understanding of both the given and fictions should be sought for in the manner in which R. Hermann Lotze assesses the problem of knowledge, namely, the relation between thought and being in both his early and late Logik. As we will argue, the way in which Vaihinger recasts the opposition between what is given objectively (data of sensations) and what is added subjectively is to be deemed a direct radicalization of Lotze’s own stance. As the conclusion will further add, what is at stake in